How are drones placed for 2018 and what are some of the biggest drone trends to watch out for? Like the internet and GPS before them, drones are evolving beyond their military origin to become powerful business tools. They’ve already made the leap to the consumer market, and now they're being put to work in commercial and civil government applications from firefighting to farming.

2017 saw the interest in drones and drone technology increase across a wide range of industries. According to Google, the search term “drones” peaked in December 2016 and maintained a high level of interest during 2017.

Thanks to their low entry cost, shallow learning curve shallow and compact size, drones continue to gather momentum and buzz in technology circles.

Drones, Unmanned Aerial Vehicles (UAV’s), quadcopters, multirotors, or Unmanned Aerial Systems (UAS), have been with us for well over 100 years.* But recent breakthroughs in hardware, software, and data processing have launched drones into the commercial mainstream.

In the US alone, the Federal Aviation Administration (FAA) forecasts the commercial drone fleet will grow 10-fold from 42,000 to 420,000 between 2016-2021. European authorities expect similar growth.

All of this adds up to big business.

Investment banker Goldman Sachs forecasts the global drone market will be worth US$100 billion by 2020. Most of this growth will be fuelled from growing demand in the commercial and government sectors. The Goldman Sachs report adds the full economic potential of drone technology “is likely to be multiple times that number, as [drone] ripple effects reverberate through the economy.”

With that in mind, what developments in drone technology and applications can we expect in 2018 and beyond?

Consider the just a few examples:

1. Drone hardware will continue to improve

New materials like carbon-reinforced polymers combined with advanced manufacturing techniques such Fused Deposition Modelling and Laser Sintering will make drones lighter, cheaper, and potentially easier to manufacture. Esoteric materials include bio-degradable bio-drones made from mycelium cells, a material similar to that used by wasps to paper their nests. Other researchers are using “Chemputers” to “grow” drones from chemicals.

Drone manufacturers are working to implement autonomous avoidance systems that process drone sensor data to avoid collisions or allow for automatic take-off and landing. This technology is currently used in a small number of devices and is constantly being improved.

Smarter drone sensors combined with Machine Learning and Artificial Intelligence are allowing companies to apply predictive analytics to a multitude of commercial problems.

Researchers at Purdue University in the United States, for example, have successfully combined drones and deep learning techniques to detect cracks in the steel components of nuclear power plants. The system automatically identiﬁes cracks based on the changing texture surrounding them on the steel surface and informs technicians about the potential danger. Processing takes about a minute. This not only saves time for technicians and allocates their work more efﬁciently but also reduces the risk of undetected damage.

US drone manufacturer and services provider Kespry has targeted the inspection and insurance market by building a machine-learning system that can count hail strikes on a roof.

By combining drone technology with machine learning, building and infrastructure managers can now identify quality defects, malfunctions, or inventory shortages faster and at a lower cost than using traditional techniques. All of this can be done automatically using photos, real-time video, thermal imaging, or orthomosaic and radiometric data gathered by drones.

Autonomous drones are also being used to conduct inspections of power plants and transmission lines and to deliver real-time analytics regarding the condition of infrastructure. Farmers are using similar technology to count crops automatically, identify weeds, and determine when crops need water and fertilizer. Countless other applications exist.

3. More organisations will use drones

According to global management consulting firm The Boston Consulting Group (BCG), companies have only scratched the surface of what airborne drones can do. More and more businesses and government organizations are awakening to how drones can help them function more effectively and efficiently.

The BCG report Drones Go to Work predicts that “over the next two decades, businesses will put industrial drones to work monitoring facilities, tracking shipments, and, perhaps even delivering groceries to your doorstep.”

According to BCG, by 2050 the industrial drone fleet in Europe and the US will exceed 1 million units and generate US$50 billion in product and service revenues each year.

Goldman Sachs expects companies and governments around the world to spend US$13 billion on drones between 2016 and 2020. 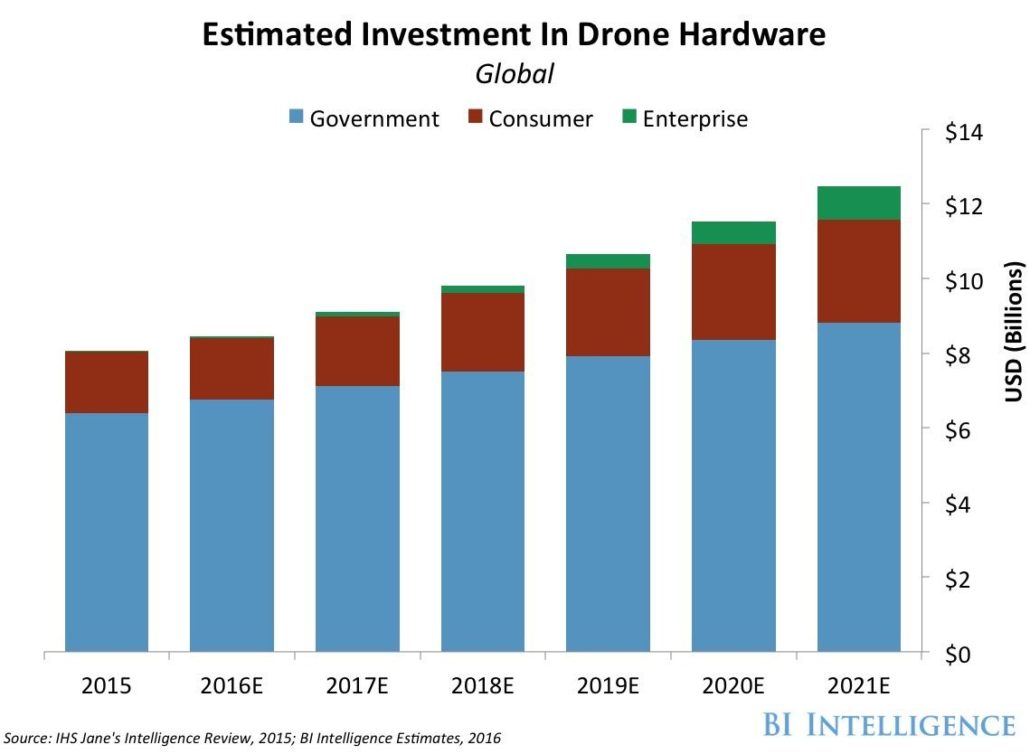 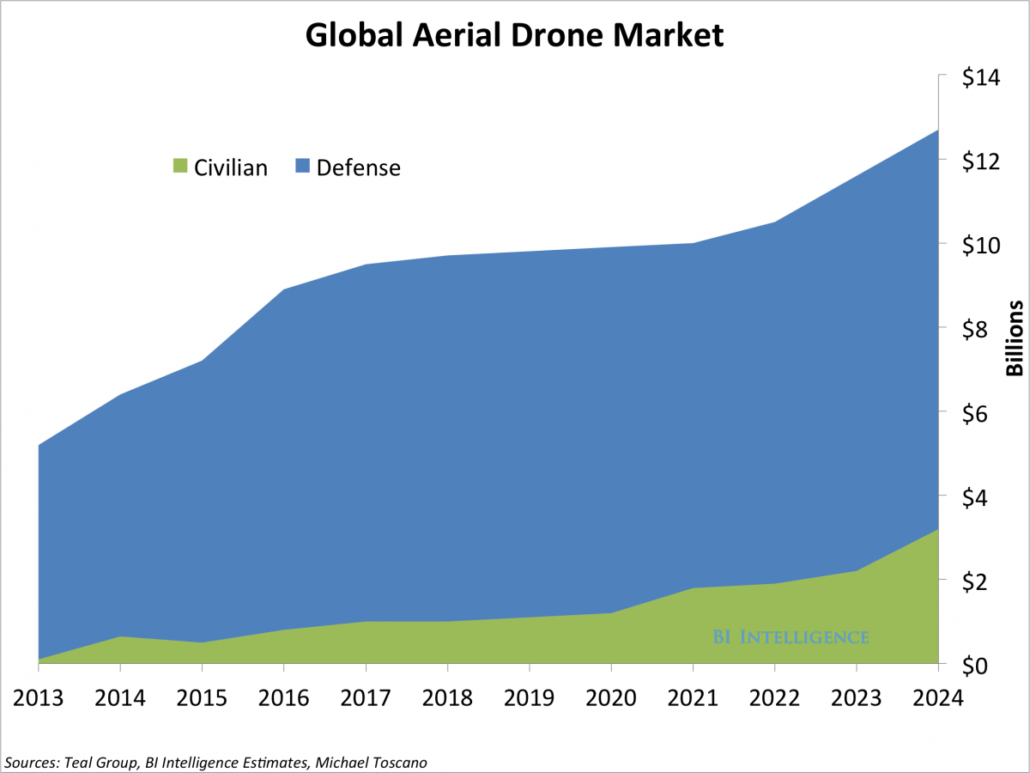 Most companies start out by paying a drone-service provider to work for them on a job-by-job basis, says a recent report from newsmagazine The Economist.

Outsourcing work to a drone service provider allows companies and government departments to focus on their core business and immediately add capacity and value to their enterprise.

4. The legal and regulatory framework will evolve

Government regulators in many countries are currently working to develop a drone air-trafﬁc management system to prevent collisions with other ﬂying objects. Such systems will enable drones to see and avoid potential obstacles and other aerial vehicles and integrate with current air trafﬁc management systems.

In the United States, NASA is leading a multibillion-dollar effort to develop an Unmanned Aerial Systems Traffic Management (UTM), an automated traffic-management system for drones capable of safely coordinating manned and unmanned flight.

In October 2017, the Australian Civil Aviation Safety Authority (CASA) responded to drone safety concerns and the rapid growth in drone numbers by tightening safety rules for recreational users. Earlier in 2017, the free CASA smartphone app, “Can I Fly There?”, which allows drone operators to avoid prohibited areas, was downloaded 20,000 times the week it was released.

*Note: The earliest UAV’s included military balloons and pilotless aircraft. Commercial and recreational drones as we now know them began to be developed during the 1980s.

TODAY: Drone flights are typically line-of-sight missions under licensed operator control. The flight path and ceiling are limited by government legislation and current insurance provisions. A typical flight lasts less than one hour, and one or two sensors gather a few gigabytes of data. The data is stored onboard and retrieved and processed after the flight.

THE NEAR FUTURE: Drones will fly extended autonomous missions using detection-and-avoidance technology. Drone traffic control centres will identify and track drones in critical airspaces. Flights will be more widespread due to legislative and insurance improvements. Multiple onboard sensors will transmit data in real-time via 4G/5G cellular networks. Operator control centres using Machine Learning and Artificial Intelligence will use the data to automatically modify the drone mission and drive a multitude of commercial applications.

Mining. Drones will be used in conjunction with Internet of Things (IoT) sensors to manage mine operations digitally. Drones can provide data about the flow of trucks, ore, and supplies in and out of a mining site to optimise daily operations. They can also provide data to help design pits.

Agriculture. Today’s drones can be used for land surveys and other data-gathering activities. In the future, they may be used to support precision farming, which relies on data about conditions in different parts of the field to more precisely manage irrigation and pesticide use, for example. The goal is to increase crop yields, while reducing the use of costly inputs.

Energy and Utilities. Drones can be used to automate inspection of offshore rigs and refineries, reducing risk and enabling preventive maintenance and avoiding costly interruptions due to equipment breakdowns. For utility companies, drones can not only provide better and more timely monitoring of transmission lines and solar fields, they can also be used to reduce theft.

Insurance. Drones can be dispatched to record digital videos of the damage to homes and buildings after storms and of automobiles at crash sites. Such capabilities can cut claims-processing costs, accelerate customer service, and generate additional underwriting data. By combining drones with machine learning, insurance companies will be able to improve predictions of damage. By assessing risks better than ever before, insurance companies will be able to set premiums more accurately.

Meteorology. Drones can deliver high accuracy meteorological data on a local scale with a very short period of time. The combination of drone and satellite data can help to produce more accurate weather predictions.

Communications. In the future, drones will be used for broadcasting telecommunication signals, such as radio, television and internet, both permanently and in temporary roles. For example, drones can form a portable mobile cellular site that provides temporary network and wireless coverage to locations where cellular coverage is minimal or compromised, such as at major public events or during natural disasters.

Defence. Defence will remain the largest market (forecast US$70 billion) for the foreseeable future as global competition heats up and technology continues to improve. At present more than 30 nation states possess, or are developing, armed drones for military use 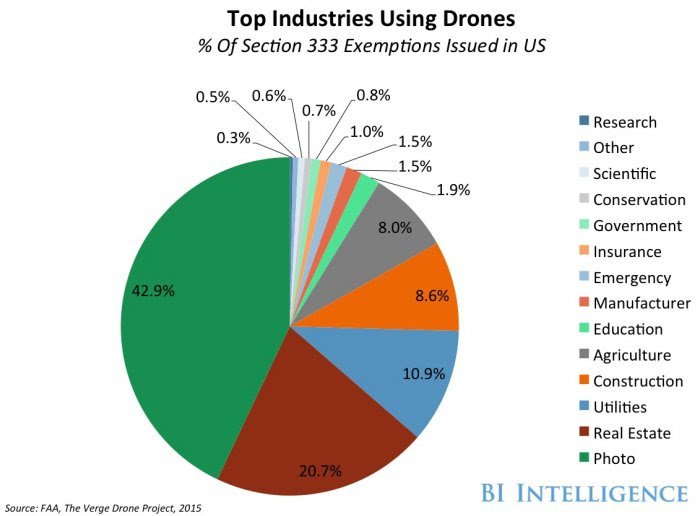 Drones are still an emerging technology. Nevertheless, there is little doubt they can and will completely disrupt existing business models.

Most companies are only beginning to understand how to use this powerful combination of talents to function more efficiently and effectively.

The superb data gathering capabilities drones make possible will affect our lives in ways we cannot yet imagine. They will shape our lives as much as cell phones, tablet computers, and other similar game-changing technologies.

One thing is certain: Companies do well to learn as much as they can to determine how they can benefit from this emerging phenomenon.