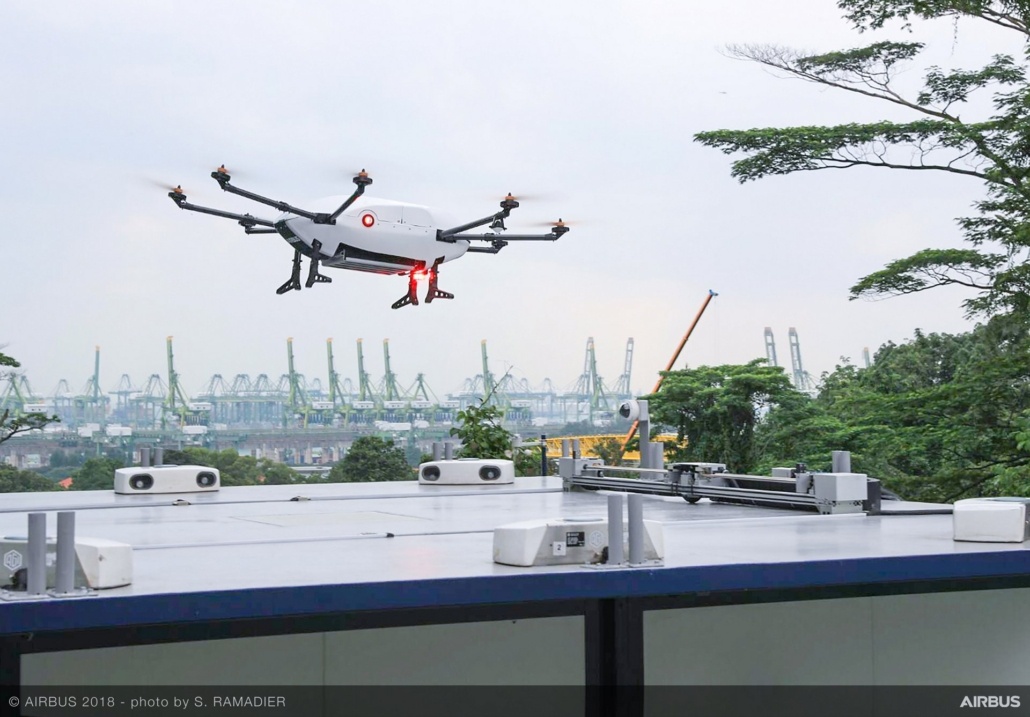 On December 7, 2013, Richard Barnes, a middle-aged farmer in Cambridgeshire, England, wandered outside to take delivery of a small parcel containing two items—a bag of popcorn and Amazon TV stick.

He had ordered the items online just 13 minutes earlier, and the world-first delivery was made by airborne drone.

The canny publicity stunt came one week after Amazon boss, Jeff Bezos, unveiled his vision on U.S. “60 Minutes” to have drones deliver packages to customer’s doorsteps within 30 minutes of them hitting the “buy” button on Amazon.com.

Amazon’s drone delivery service—dubbed Prime Air—has yet to enter the commercial mainstream. But project is still very much alive, and it inches closer to reality every day.

Indeed, a swarm of global engineering and logistics heavyweights—including Google, Boeing, Mercedes-Benz, DHL, Walmart, Zipline, and Windhorse Aerospace—are convinced that drone deliveries are the way of the future. And they are backing up their belief by investing heavily in drone technology.

So, how long do we have to wait until we see swarms of drones buzzing overhead delivering everything from pizza to medicines to mobile phones?

For most of us, drone deliveries are some way off. But in a few places, it has already arrived.

“This is a working system, not a one-off wonder,” Flytrex CEO, Yariv Bash, told Forbes.com.

The autonomous drone system delivers up to three kilograms of food or consumer products from shops and restaurants on one side of Reykjavík to a designated point across a large river separating the city.

The drone can do in four minutes what it takes a car 25 minutes to do in heavy traffic.

After landing in an empty field near the designated neighbourhood, the drone is met by a courier who makes the final delivery to the customer’s doorstep.

The company plans to begin lowering packages via a cable directly to customer’s backyards, with customers tracking their delivery through an easy-to-use app.

The driver loads and launches the package from the top of delivery van, and the drone flies autonomously to the pre-programmed delivery location.

The drone’s guidance system draws from online databases covering airspace, topograhpic, weather and wind conditions, and data from on-board sensors like a GPS Compass, LIDAR, and infrared camera for landing.

After delivering the package, it returns to the delivery truck at a planner stop and autonomously redocks and recharges for its next delivery.

If the technology shapes up as hoped, one day a UPS driver could push a button on a touchscreen affixed to a truck’s dash to send a drone off to complete deliveries.

Meanwhile, European aerospace giant Airbus has teamed up with the Singapore government and postal service to roll out new parcel-delivery drone service in that country later this year.

This type of delivery technology is being driven by a powerful economic imperative.

Delivery drones could shave huge distances off delivery routes, especially in rural areas. UPS estimates that cutting off just one mile for the routes of each of the company’s 66,000 delivery drivers would amount to $50 million in savings.

Helping out in remote areas

Google, as might be expected, is one of the largest players to get into the drone delivery business with its “moonshot” Project Wing, which is largely being developed in Australia.

The first Project Wing test was performed in Australia in 2014, when the company lowered a first aid kit, candy bars, and dog treats by line some 50 metres to a remote cattle station in Queensland.

In 2017, Project Wing began making direct deliveries to homes in the rural Googong area outside of the city of Canberra. Alpaca farmers, math professors, equestrians and artists living 40 minutes from town ordered food and medicines using a smartphone app and had them delivered by drone.

Other countries with remote populations and challenging geography are also rushing to implement drone delivery systems in sparsely populated areas.

On March 28, 2018, for example, China’s biggest logistics firm, SF Express, announced it had received the first official permit in China to deliver packages via drone to rural and sparsely populated areas in China.

And while Amazon is still wrestling with the FAA about where and when it can safely fly its parcel-carrying quadcopters, JD.com (also called Jingdong)—China's largest online retailer—will soon have super-sized autonomous, three-engine, vertical-takeoff drones that can carry a payload of over 1 ton up to 300 kilometres.

JD.com’s intended target is Shaanxi farmers, who can use the drones to distribute their perishable fruits, vegetables, and meat without worrying about Shaanxi's rough, rural roads.

The Shaanxi provincial government has agreed to let JD.com operate hundreds of low-altitude routes within a 300 kilometre radius, an area of more than 30,000 square kilometres.

The drone aims to deliver medical supplies to villagers and return body samples to laboratories for analysis.

A similar service developed by Zipline has operated in Rwanda since 2016. The company has developed what it claims is the world’s swiftest commercial fixed-wing delivery drone, with a top speed of 128 kilometres an hour.

Of all the entities that worked on civilian drone technology in 2017, Amazon stands out for the sheer number of headline-grabbing ideas it generates.

These include giant airborne fulfilment centres that can dispatch dozens of autonomous drones across wide areas, charging stations mounted atop lampposts and church spires, and retractable chutes that deliver packages from the airborne drone to the ground in a controlled manner.

By August 2017, Amazon had been awarded at least 64 patents for concepts and technologies for delivery drones, including patents for aircraft designs, safety and security systems, methods for transferring goods from the air to the ground, and hive-like fulfilment centres.

These patents offer detailed insights into how the company is determined to make drone delivery a reality.

At present, most delivery drones are only capable of carrying small loads. But drone designs currently on the drawing boards will carry astonishingly large payloads.

Elroy Air, a California startup, has secured $4.6 million in seed funding to develop an autonomous drone capable of carrying about 70 kilograms up to 500 kilometres.

Meanwhile, Chinese developers are currently testing large long-range transport drones for rapid cargo deployment in the South China Sea. The AT200 drone is based on a low-cost fixed-wing aircraft that can carry 1.5 tonnes of cargo, is capable of taking off and landing on a short runway, and has a maximum range of 2,000 kilometres.

In a similar vein, Spain-based Singular Aircraft has successfully tested its Flyox Amphibious UAV in Iceland that can carry over 2 tonnes of cargo with a maximum distance of over 1,241 kilometres.

Looking further ahead, another California startup, Nautilus, is developing an autonomous, amphibious Boeing 777-sized drone with a 100-ton payload capable of flying from California to China.

Nautilus hopes to finish production of the full-scale, over 60-metre drone by 2020, then have it undergo testing and certification before beginning actual commercial flights.

Not to be outdone, Chinese newcomer Tengoen Technology (also spelled Tengdun) is already at work building an eight-engine drone the size of a medium-sized manned cargo plane. It has a wingspan of more than 42 metres and can carry a payload of 18 metric tons payload up to 7,500 kilometres.

It won’t quite be the Jetsons, but several companies are already competing to create the flying car/drone, also known as the AAV (Autonomous Aerial Vehicle).

The concept first emerged with prototypes from major players such as China’s Ehang Corp, whose eco-friendly AAVs aim to serve as autonomous personal transportation devices. The company has raised over $50 million in funding.

Another competitor is Volocopter, a German company that has developed a two-seater drone with 18 rotors that fully charges in two hours and can fly for 30 minutes at a cruising speed of 50 km/h. The company has received $30 million in funding from Daimler and was also chosen to lead Dubai’s revolutionary aerial shuttle service.

The head of Dubai's Roads and Transportation Agency said that the Volocopter drones will be able to carry one passenger weighing up to 100 kilograms for around 30 minutes. Once entering the drone, the passenger will choose a destination from an onboard screen, the only controls in the craft.

Uber is also joining the race with its Uber Elevate—a vertical take-off and landing (VTOL) aircraft “fast-forwarding to the future of on-demand, urban air transportation”—which the company hopes to use to launch as an aerial taxi service by 2023.

The electrically powered aircraft is a mashup of a plane and a helicopter that will fly at an elevation of 1,000 to 2,000 feet. The company envisions thousands of its flying taxis shuttling passengers between rooftop “skyports” that look straight out of Star Wars. The landing sites will be equipped to handle 200 take-offs and landings every hour. The aircraft will be piloted by humans at first, but eventually will fly autonomously.

The future of drone delivery

Companies around the world are fast becoming aware they have only scratched the surface of what airborne drones can do.

According to a recent Price Waterhouse Cooper report, delivery drones could become business as usual by 2030.

As we have seen, large retail and logistics companies are investing in delivery drones with the aim of achieving increased efficiency, lower costs, and increased customer satisfaction.

The scope of delivery drones could also be beyond dropping off parcels in the ‘last mile’ of client logistics.

Drones will also be ubiquitous in warehousing and able to autonomously conduct real time stock checks by scanning inventory. This will integrate seamlessly with other ground-based autonomous warehouse robotics in an end-to-end management and movement of inventory driven by AI with no human touch.

The Boston Consulting Group estimates that by 2050, the industrial drone fleet in Europe and the US will comprise more than 1 million units and generate US$50 billion per year in product and service revenue.

Clearly, drones have the potential to transform logistic industries. Still, manufacturers and legislators have many hoops to jump through to turn that vision into reality.

At present, too many tests end in delivery drones malfunctioning or crashing. Legislation that might permit drone deliveries is also currently lagging far behind what drones can technically achieve.

Despite all the challenges, one thing is sure—the drones are coming. 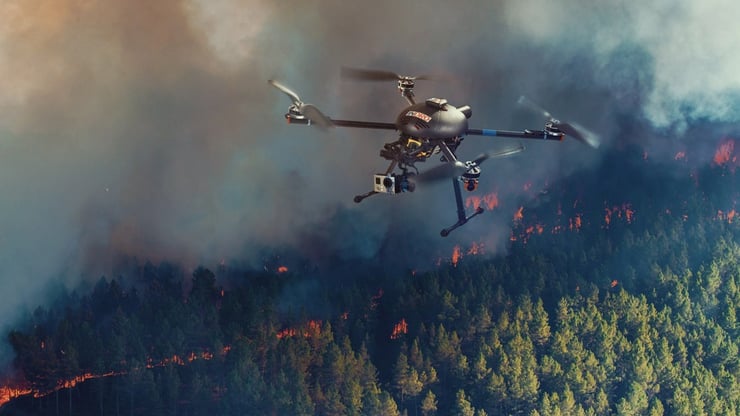